The Banzaï Volleyball club was founded on May 19, 1996. The sport association “Banzaï” is part of the Mamosa-Cunina foundation. On September 5 of the same year, the club was officially affiliated with the Haitian Federation of Volleyball (FHVB) and with the League of Volleyball of the West (LVBRO). « Banzai » was a Japanese battle cry during the war and is literally translated as « Ten Thousand Years ». The Japanese warriors honored the emperor by shouting « Banzaï », meaning, « Long live the Emperor ». Banzai is a term derived from the Japanese samurai spirit and ideology of not accepting the shame of defeat.

The Banzaï club is a sport association with no political and economic interest. It offers young people the possibility of learning and playing volleyball to enhance their physical and moral health. It provides a climate of friendship and mutual respect among the members. There is no room for any prejudices and discriminations on political, economic and religious affiliations. The article 3 of the statutes of the Banzai club clearly emphasizes it to the members.

The Banzaï banner bears the colors of green and red. The logo presents two players holding a ball together over the net. It reminds members that Banzai is an inclusive club where young men and women witness to authentic friendship and team working. Each one carries the responsibility to make Banzai a known and a respected club, holding to its ideals and values. The Banzaï club has its own directives and it is governed by the general assembly that meets at least once a year. The Executive Committee, composed of 7 members, is elected for a term of four years.

The club solicits a minimum annual membership fee from the members. However, honorary members contribute according to their capacity and generosity. A news bulletin for members’ information appears three to four times a year. The first training session for women happened on May 21, 1996. It was directed by Eddy Etienne at the Sacred Heart Club at Turgeau. The first training session for men was held on October 1, of the same year and was directed by Herode Pierre at the Sport Center called « Dadadou ». Today, training sessions are held at different places directed by a team of trainers, under the supervision of the technical staff. The Club used public and school courts for training sessions and actual games until July 2017. From that time we had our own playfield in the sports center under construction.

Since 1997, the Banzaï club participated in different sport competitions organized by the League of Volleyball of the West (LVBRO and the national federation (FHVB). Banzaï teams participated in the tournaments of the Olympic week organized by the Haitian Olympic Committee. In 2007 we started our volley-ball school. Every Saturday morning kids are learning how to play volleyball.

The club is proud of having had several players (man and women) included in the national selection that competed in international tilts in different countries.

Most members of the club are students. The club encourages them to make efforts in obtaining good results at school. Education is given a priority. The club assures that trainings and games do not affect the member’s academic life.

From a small foundation, the Banzai club became a well-known sport association in Haiti. But aware of the financial demands of the club, we worry about its future. Most members of the club are students from lower income families. These are young students who, in spite of poverty, hope for a better life, hope for a better future. The club needs financial help and support for the advancement of its mission and vision. Major expenses cover the purchase of equipment for training sessions and competitions; uniforms; compensations for trainers; the cost of organizing and expenses on the annual summer camp. Other expenses would include transportation and training expenses.

Banzaï club has been very successful because of so many generous individuals who believe that through sport, we can make a difference in the life of many young Haitian men and women. Haiti is in need of hope and we are planting this hope for the future with these young men and women who express their desire and passion to life through sport.

The traumas created by the disaster of January 12th, 2010, the losses in human lives and the almost total destruction of necessary infrastructure for the practice of volleyball seemed to have sounded the end of Banzaï and the volleyball. But thanks to the testimonies of support on behalf of so many friends of the club, the phoenix “Banzaï  » rose from the ashes of despair.

So many friends of Mamosa and Banzaï in Belgium started with actions of fundraising to make our sports association affected by the earthquake be reborn. They will make it possible to find the necessary support for the realization of a new ambitious project which consists in the construction of a sports complex which can receive all the activities which the Mamosa-Cunina foundation and Banzaï wants to undertake.

Presentation of the building project 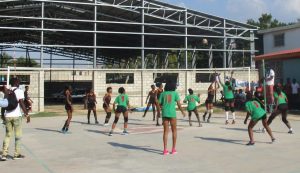